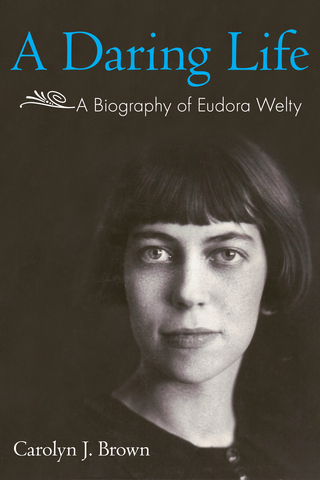 A Daring Life: A Biography of Eudora Welty

Mississippi author Eudora Welty -- winner of the Pulitzer Prize and the National Book Award and the first living writer to be published in the Library of America series -- mentored many of today’s greatest fiction writers. This fascinating woman observed and wrote brilliantly throughout the majority of the twentieth century (1909–2001). Her life reflects a century of rapid change and is closely entwined with many events that mark our recent history. This biography tells Welty’s story, beginning with her parents and their important influence on her reading and writing life. The chapters that follow focus on her education and her most important teachers as well as her life during the Depression and how her new career, just getting started, was interrupted by World War II. Throughout she shows independence and courage in her writing, especially during the turbulent civil rights period of the 1950s and 1960s.

After years of care-giving and the deaths of all her immediate family members, Welty persevered, wrote acclaimed short stories, and won the Pulitzer Prize in 1973 for The Optimist’s Daughter. Her popularity soared in the 1980s after she delivered the three William E. Massey Lectures to standing-room-only crowds at Harvard. The lectures were later published as One Writer’s Beginnings and became a New York Times bestseller.

This biography intends to introduce readers of all ages to one of the most significant writers of the past century, a prolific author who comprehends and transcends her Mississippi roots to create short stories, novels, and nonfiction that will endure for all time.

"A Daring Life: A Biography of Eudora Welty by Carolyn J. Brown is a very detailed biography of Welty that places her in the social context in which she developed and lived. . . .I recommend this book to anyone interested in Welty and think it should be part of the budget of all libraries in the USA and UK." From Rereading Lives

"If the point of this book was to inspire more people to read EW, mission accomplished. . . .A Daring Life really captures the TWO talents of Welty. She was not only a gifted writer, but also a talented photographer. This comes across clearly here with the inclusion of the photos in the book." From goodreads (4 stars)

"Must have for Mississippi libraries. Good solid addition to biography collections." From goodreads (5 stars)

"A Daring Life is an engaging biography of this famous short story and novel writer from the Deep South. I must admit to not having read any of Welty's stories or novels, but I will certainly be looking them up now." bookaddiction

"A Daring Life by Carolyn Brown is a moving testimony to a great American writer." Mississippi Business Journal

"In her 2012 book, A Daring Life, Carolyn Brown highlights the amazing accomplishments of this gifted writer, while crafting intricate syntax of her own. . . .For a new release to pick up this summer, A Daring Life is an easy, educational, and inspirational read." 'Bout Books

A Daring Life was selected by the Mississippi Library Commission to be Mississippi’s selection at the 2012 National Book Festival’s Pavilion of the States.